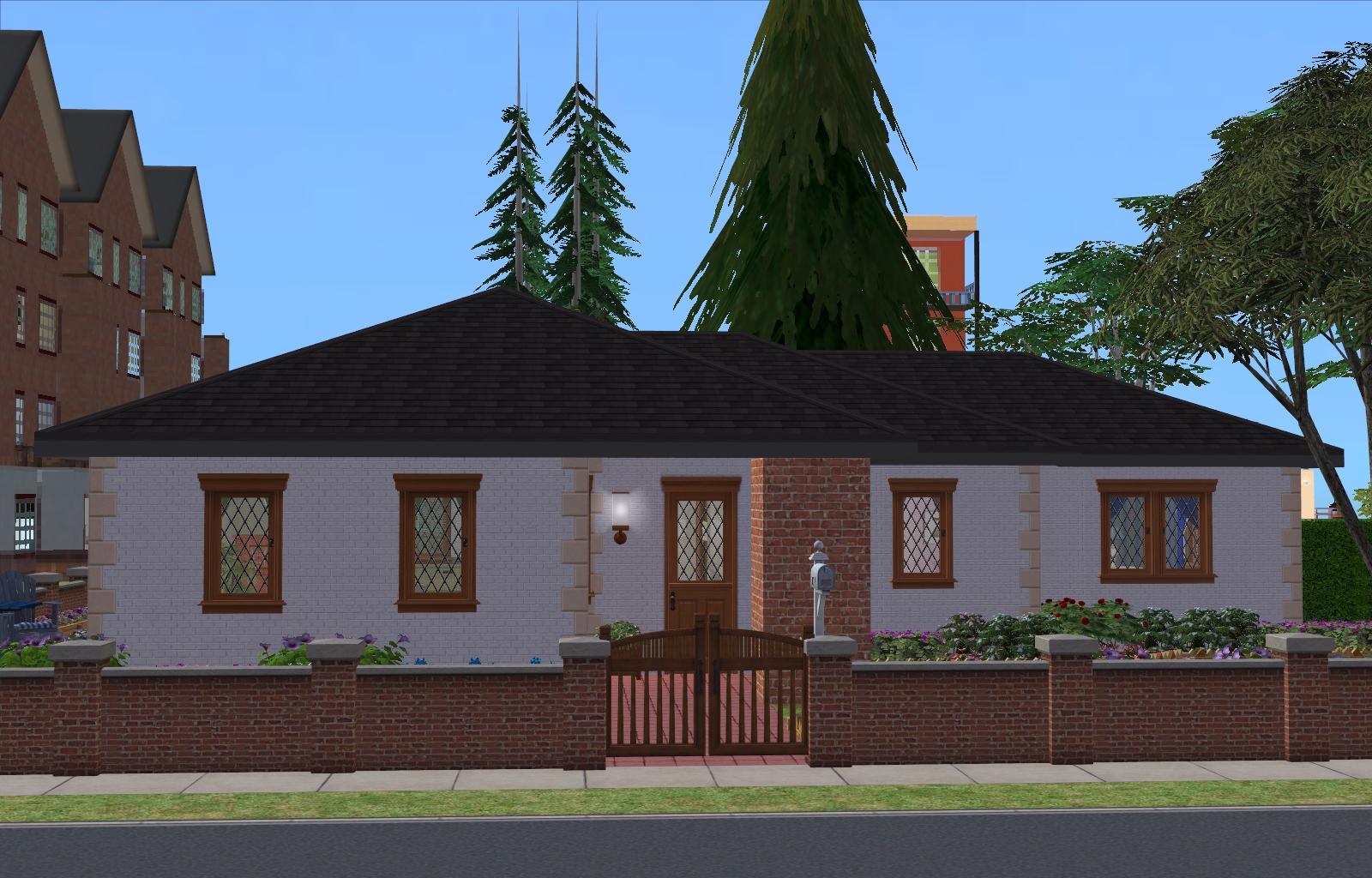 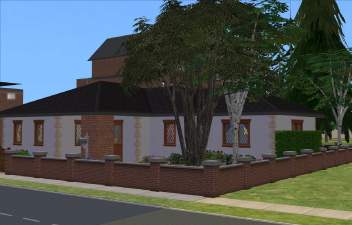 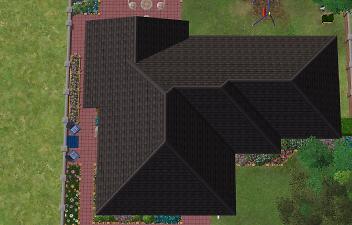 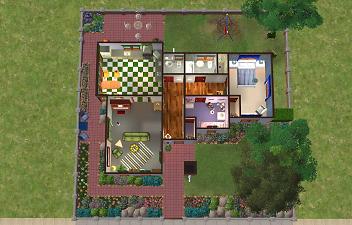 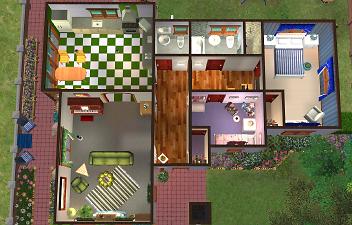 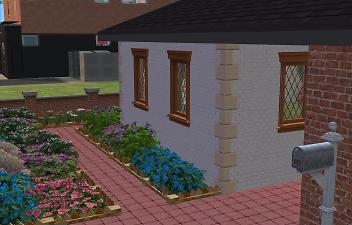 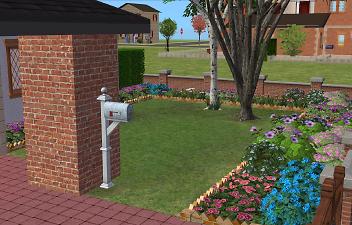 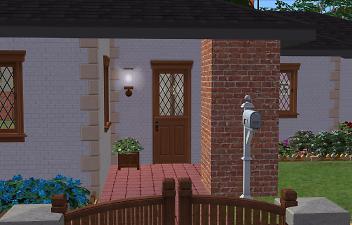 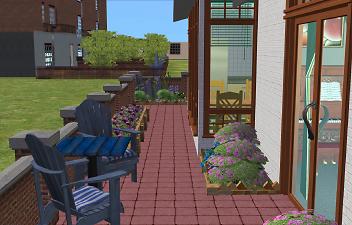 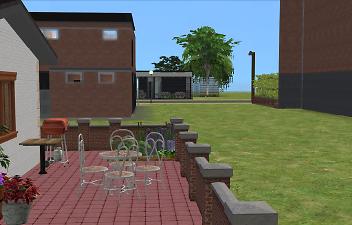 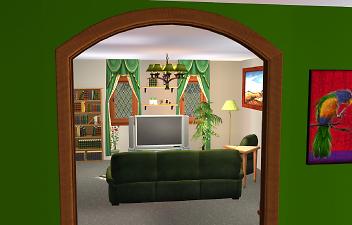 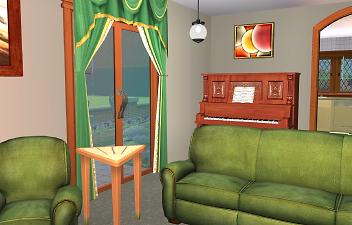 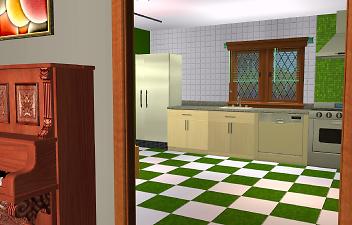 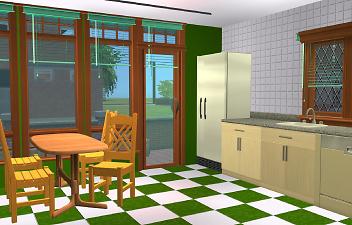 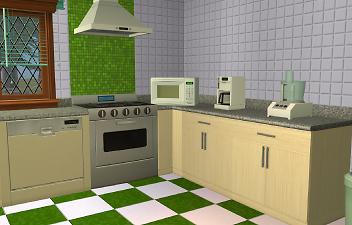 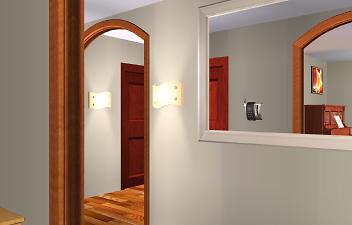 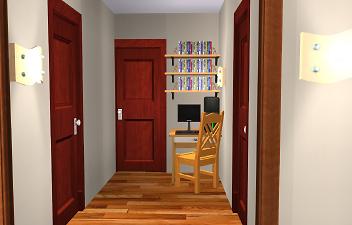 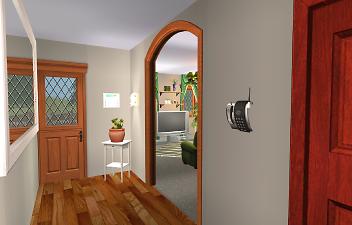 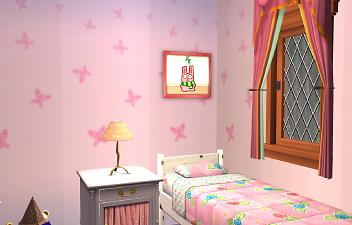 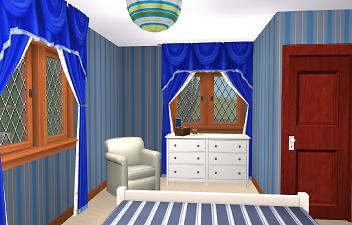 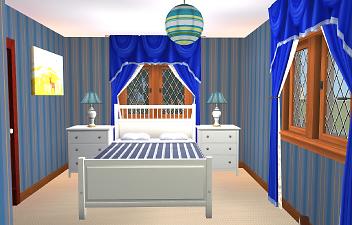 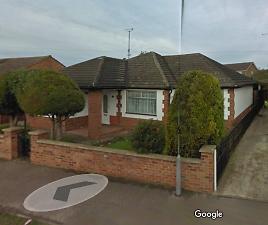 The Shelley Bungalow
The Shelley Bungalow has two bedrooms, one and a half bathrooms and large sitting room and an eat in kitchen. The garden is landscaped with a range of shrubs and flower borders. There is a patio with a water feature to enjoy the summer evenings. 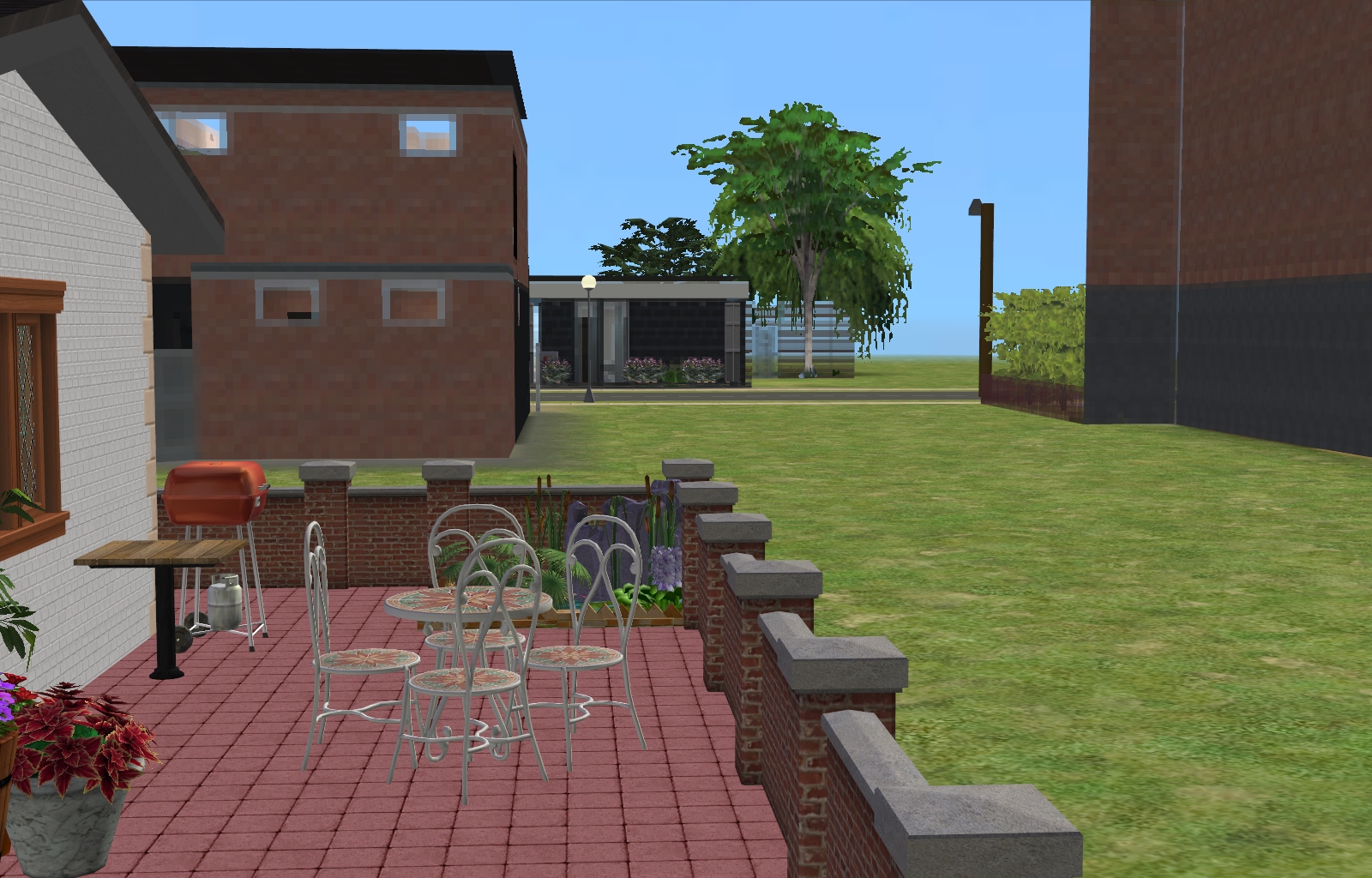 This bungalow was inspired by a walk down a local street. The image below was taken from google street maps. The trees are no longer there. 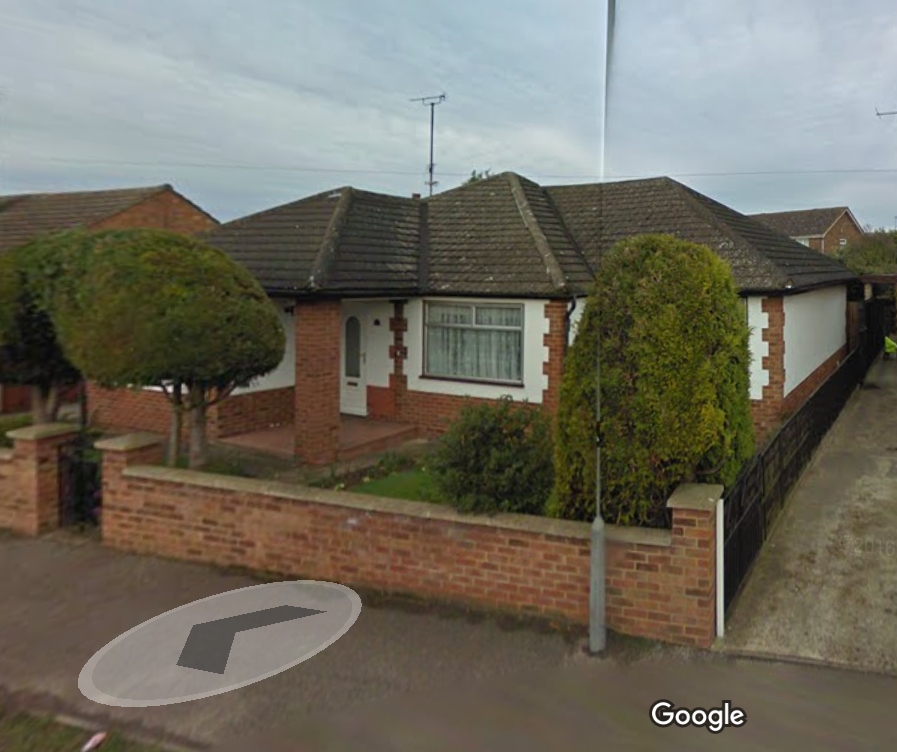 Note
You will need a garden hack for this bungalow as the most of the shrubs and flowers are placed off-grid.
The chairs have been moved for the photoshoot only, they are set correctly in the package file.

Definition
A bungalow is a type of building, originally developed in the Bengal region in South Asia. Common features of many bungalows include verandas and being low-rise. A bungalow today is a house, which sometimes contains a small loft. It is either single-storey or has a second storey built into a sloping roof, usually with dormer windows.

The term originated in India, deriving from the Hindi word (bangala), meaning ‘Bengali’ and used elliptically for a ‘house in the Bengal style’. This Asian architectural form and design originated in the countryside of Bengal region in South Asia. Such houses were traditionally small, of one storey and detached, and had a wide veranda. The term was first found in English from 1696, where it was used to describe ‘bungales’ or ‘hovells’ in India for English sailors of the East India Company. Later it became used for the spacious homes or official lodgings of officials of the British Raj, and was so known in Britain and later America, where it initially had high status and exotic connotations. The style began to be used in the late 19th century for large country or suburban residential buildings built in an Arts and Crafts or other Western vernacular style - essentially as large cottages, a term also sometimes used. Later developers began to use the term for smaller buildings. 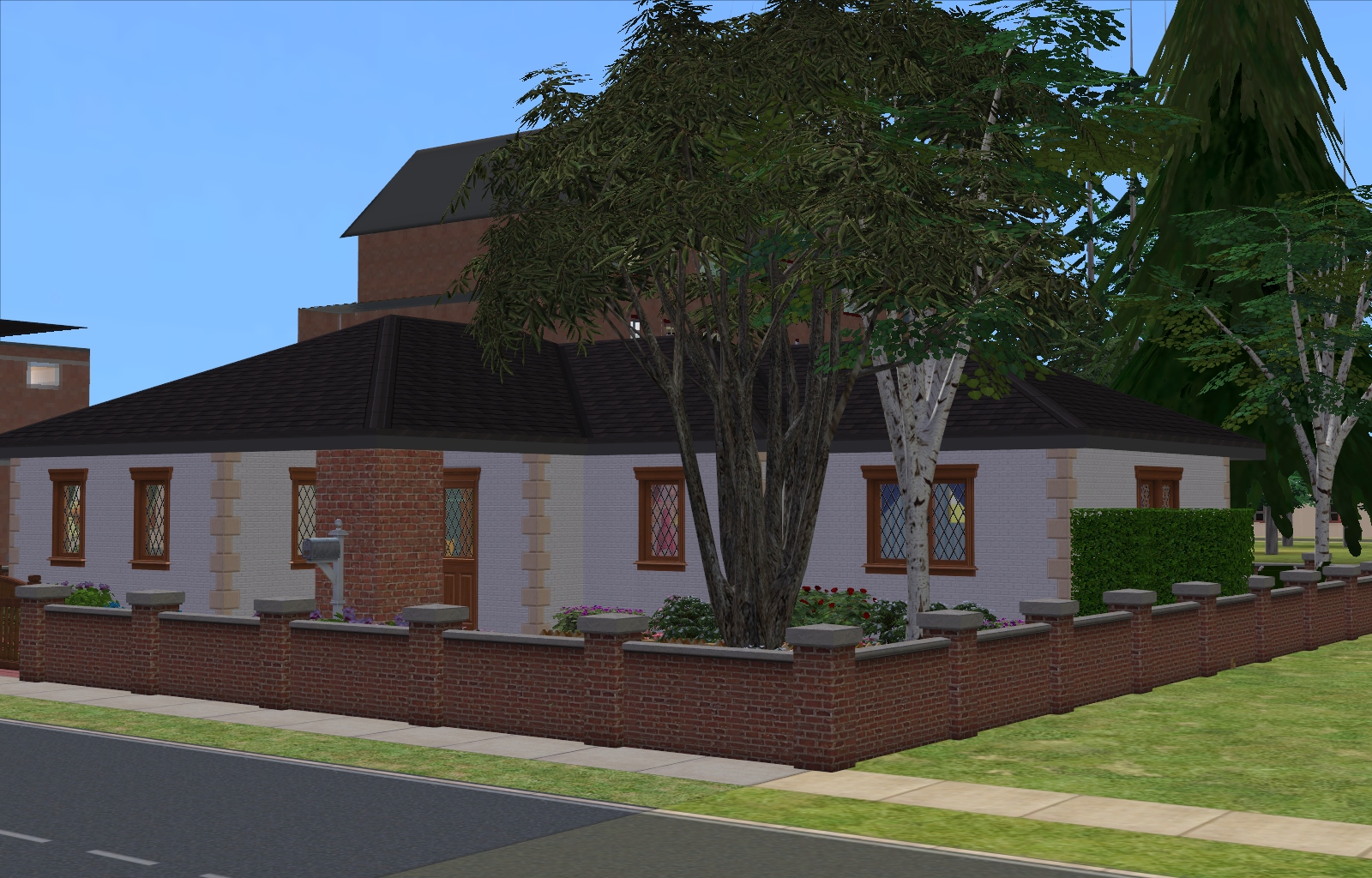 * The following information shares where to find it in buy-mode, any buffs/moodlets they get from it and what it can be used for!

Description: Single Door with Glasses. DO NOT CLONE - DO NOT REPOST ANYWHERE Please visit: www.marylousims2.it www.modthesims2.com

Description: Single Door with Glasses. DO NOT CLONE - DO NOT REPOST ANYWHERE Please visit: www.marylousims2.it www.modthesims2.com

Description: Double Door with Glasses. DO NOT CLONE - DO NOT REPOST ANYWHERE Please visit: www.marylousims2.it www.modthesims2.com

Description: Double Door with Glasses. DO NOT CLONE - DO NOT REPOST ANYWHERE Please visit: www.marylousims2.it www.modthesims2.com

I'm a creative type of person. I do lots of things in my spare time, for example I sing in a local choir (I'm also their Web and Publicity Manager, which includes creating all the posters and programmes for the concerts), craft - especially card making, and of course Sims!
I work part time too. And when I'm not working I have to do the cleaning, shopping, cooking, ferrying and lots of other things too!
I'm a busy person, but that's the way I like it!

Creation requests (Lots only):
I will consider requests, but before you ask me take a look at what I've already built. If you have something in mind and it fits in with what I already build then ask away. Please do not ask me to build weird and wonderful things eg gothic, cemeteries, creepy/grungy or fantasy. You can read a more detailed policy on creating for you here http://www.modthesims.info/showthread.php?p=3963603&posted=1#post3963603

Please be aware that I'm very busy and don't have that much free time so it might take a while, but if you're prepared to wait...:)

Most of my creations are here at MTS but you can find a few exclusives at www.leefish.nl and at www.simfansuk.com