This is intended as a further developement of J.M. Pescado's marriage-traditional hack.

When two sims get married/joined, the "marriagee" always get the same last name than the active sim (the "marriager"), who did the proposition.

JMP did a mod which changes this fixed rule, so in opposite-gender marriages the female gets the male's last name, and in same-gender joined unions they retain their original last name instead.

With my mod you may choose what to do in single marriages, indipendently by gender and selectability of sim spouses.
Just after the marriage, a dialog will pop up: you may choose to make no change (both sims will retain their last names), have them both the marriagee (shown in dialog's icon), or marriager one ("other sim"). 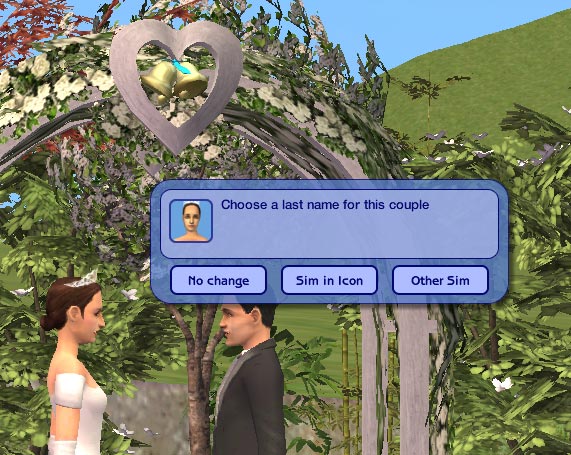 This mod should work in base game as well as in any combination of EPs, Pets and Seasons included; if you notice any glitch, expecially in dialog strings (even if in other dialogs, not marriage-related) please let me know.


Additional Credits:
Many thanks to J.M. Pescado; studying his mod was essential for me being able to even think of make this.
Plus, I know he hates being thanked, and I couldn't resist ;D.

A HUGE thanks pile to linolino (for his BV update and Spanish/Portuguese translation), SimSanta1992 (for French and German translations) and Lord Darcy (for Korean translation, compression and general overlook to this mod).
Last but not least, jfade for Compressorizer and general awesomeness.

FIXED 2008-10-26
At last, I've installed AL and I was able to understand what's wrong with this hack; witchery really scrambled last names a lot.
The AL updated hack is now fixed: I've tested it in pretty much every combination and it seems ok. Please let me know if I overlooked something, thanks for the patience!

Fixed BV-FT version too: the first time I uploaded the wrong file

Back to download view
300 Comments / Replies (Who?) - 256 Feedback Posts, 36 Thanks Posts
Hide Thanks Posts for this thread (Show only feedback)
Page 1 of 13
Kaddel
Lab Assistant

Very usefull! Thanks!
"A friend is someone who knows the song in your heart, and can sing it back to you when you have forgotten the words."
DarkDisorder

This is a great mod, thanks!
You've been a fallen angel, ripped out of the sky.
But as your wings grew strong enough,
You left me, behind to die.
kadoatiness
Test Subject
#5

Thank you, this will be useful. I usually go for double-barreled surnames using SimPE, but triple-barreled is a bit ridiculous, so this'll come in handy xD
Touchstone

That's such a great idea. How do you guys manage stuff like that? Just curious.
Cooldadx4

This is great ... Although I have a lesbian couple that I just married and was wondering if you could adapt this to make a hyphenated last name ..Meaning combining both last names into one like cheryl smith-jones ?? or if there is a way to do it in SimPE maybe ?
ME http://www.sims2community.com/yearbook/2007/984/
FzzyDg8

I could have used this mod many times ago....thanks for sharing this great idea and for all your hard work on this!
draiol_lady

Great mod. But what about the kids?
patul

Easier than sim PE to change names , thank you

You know a site allowing re-upload of free build/buy stuff in lots ? Help us to update the list !

Oh this is just great! Many thanks for making this.

Do you think you could make a hack that men won't get to wear the big 20 karat diamond ring on engagement? it looks so silly on them.
Ms.McThistlepants

But whichever Sim is the one who "makes the call to the arch" - in other words, whoever is highlighted when you click the arch and invoke "get married/joined" - that's the Sim whose last name is taken.

So just be careful who you're currently playing when you click the arch.

Why did we need a hack for this?
Ladyetaine
Test Subject

Great idea, I like being able to have sims keep their original last name when they get married, was getting tired of going into SimPE and having to change them manually.
Thanks.
gwillewyn

This is great, I'd always hate it when my sims get married and they get her last name...always seemed weird to me! Thanks!!

This mod allows YOU to chose which last name is taken if any at all ....Some people like to keep the last name of the other sims as to have two different last names but be married this actually still goes on a lot today in the "real" world ...And still other times people often use a joint last name IE
smith-jones ....Im hoping there is someway to make the later statement possible but i like having a choice of not having to automatically have the last name as the person who did the proposing ! That is why we NEED this hack !
ME http://www.sims2community.com/yearbook/2007/984/
flameflash

Well I love it. My wife plays the game more than I do and I had my first marriage the other day and was confused when the guy had the girl's last name. This will help out with that. Many many thanks.
I'm not conceited, conceit is a fault and I have no faults.
nerina

Thanks, I hate that someone has to loose their last name when they get married, it makes marriage look like a passage of property to me. All my sims whose name starts with a B will use this :D
SillyBonn

I love the option not to change any names!
AmandaPanda1988

Thank goodness! I really wanted something like this thanks!
Octavius

Great mod, something Maxis should have done from the very start, thanks.