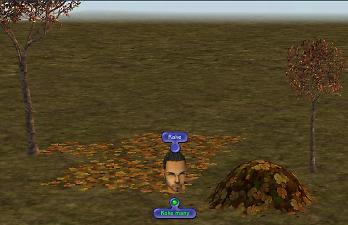 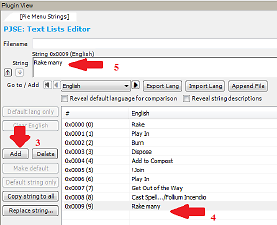 UPDATE May 22nd Added the ultra-OCD version, that gets the nearest pile first (however it's up to you to provide access paths, gates, etc.). If you've played with this mod a bit, you might have noticed that whatever pile you clicked, it was always going to start with the first one that ever fell from a tree. And since each tree builds one pile at a time, the poor Sim went from tree to tree. Still an improvement from you clicking from tree to tree, but not perfect. Now, at last, all's right in the leafy world. If i haven't recommended them already, there's a rake faster mod here on mts, and a get nearest compost pile over on insimenator. They're both compatible with mine, and overall will make a seamless gardening experience. Enjoy

Added the OCD versions that do check whether the pile is tidy before allowing the option to show. Alternative, not replacing, because everyone's allowed their preference

Very important: there are now six versions of this mod, please download only one! If you have the Harry Potter spell replacement mod, get one of those marked _HP.

What does this mod do?
It allows Sims to keep on switching to the next and next pile of leaves until they're done (in spring?

), they're in a bad mood, or you simply cancel the interaction.

How does it work?
It first tests whether there are 2 or more leaf piles, thus allowing the menu option to show -- that's a new BHAV called Interaction - Rake Many - TEST. Because it does not test if the pile is tidy or scattered, this means that if you have one of each, yes, the option will show. I liked this and left it as such, because it means you can be in one corner of the lot and still be "aware" of the leaves in the opposite corner.
When clicked, it calls into action another new BHAV called Interaction - Rake Many, which does nothing more than switch to the next lead tile of a leaf pile (meaning that a scattered leaf pile is a 2x2 square of tiles, but only one of them is used to count how many piles there are), and then call Interaction - Rake on it.

Overriden resources:
- TTAs called [Pie Menu Strings] instance 0x00000001, in group 0x7FA3147D;
- TTAB called leaf pile with same instance and group ID.
The 2 new BHAVs are, well, new. No worries about them. Why didn't i just tamper with the existent Rake interaction? Personal preference: on every sticky or non-sticky note i've made about the Sims 2 in the past quite a few years, there's a mention of "rake many", but i never found it elsewhere, nor got round to it. Now that i have, it would feel like a pity if it was simply hidden inside Rake.

Expansions required
Because of the Cast spell.../ inside the TTAB, this mod doesn't just require Seasons, but also Apartment Life. If you don't have that expansion, it's easily fixed: remove the Cast spell line from the TTAs, as well as the pie menu option from the TTAB. Hobby enthusiasm gain is inside Interaction - Rake, which, again, i'm not overriding.

Known conflicts:
It does not conflict with mods of the "rake faster" type, which modify a single number in the Interaction - Rake BHAV. However, it does conflict with my mod that replaces spell texts to match Harry Potter style. So, if you have that mod, download the file here marked _HP, which, being alphabetically loaded after the spell mod, will prevail. However, making them into one is very easy, and i'm encouraging you to try it out: click below for instructions.


First, open the stD_hp_spell_replacement.package using SimPE. On the left, click Pie Menu Strings (arrow 1), and then in Resource List on the right choose the one whose Group ID is 0x7FA3147D.

In Plugin View below you will see a list of all the things that can show up in the pie menu of a leaf pile. Follow arrow 3 to Add another row, the text of which you can then replace with "Rake many". Commit and save. Now close this and open stD_rakemany_HP.package, select the exact same resource and then delete it. Save again. Now you have unified the two and there's no conflict to be had.

I hope this makes your Sims' autumns nicer