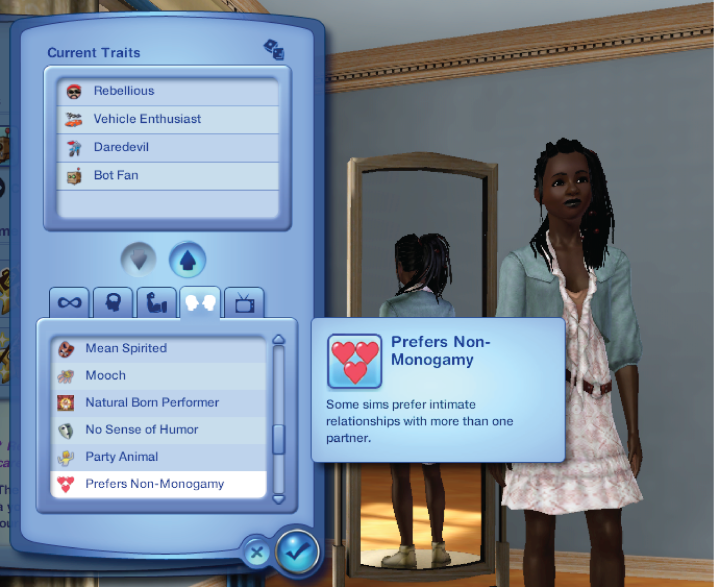 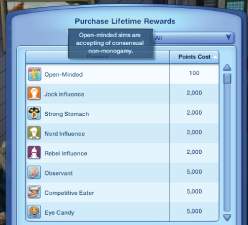 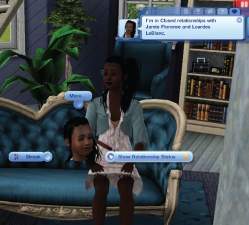 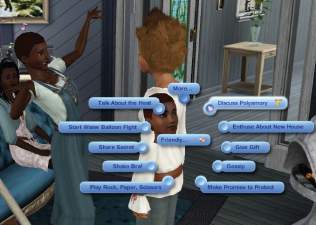 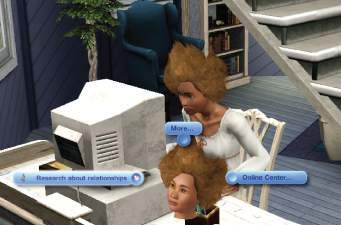 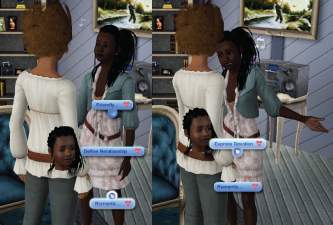 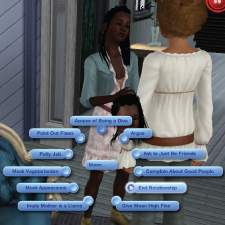 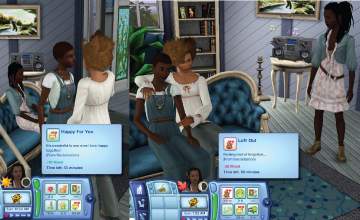 132 Thanks  Thanks     66 Favourited
Mods with custom traits can make saves unplayable if you don’t remove them correctly, so follow the instructions in the Removal section when you want to stop using this mod!
Bugs and Updates

Added French translation courtesy of SecretX!
In some cases activating this mod causes sims to lose the ability to interact with anyone outside their household, currently investigating this - possibly a conflict with NRaas Selector.
Summary
This is a mod for improved non-monogamous relationships! You still can’t have multiple EA-defined partners (e.g. going steady), but you can give romantic (or platonic - this mod does both) relationships involving any number of sims more complexity than you get with just No Jealousy and Above Reproach, and do it without any sims getting mad.

Documentation
This mod works by adding extra rules regarding jealousy, based on its own relationship types, traits, and interactions.

Open and Closed Relationships
Take two sims in a relationship, A and B, and a third sim C not yet involved with either of them. A can see their relationship with B as:If A and B are romantic interests but not in a committed Open or Closed relationship, A won’t get jealous over B until the romance has lasted at least kSeriousRomanceThreshold (default: 4) days. After that, how A reacts to B’s romances with other sims will depend on A’s traits - if A has both the Open-Minded trait and the Prefers Non-Monogamy trait, A still won’t get jealous.

Additional Traits
The Open-Minded trait unlocks most of the social interactions in the Interactions section, and allows sims to not see non-monogamy (in their own and other sims’ relationships) as a betrayal as long as the terms of the relationship in question are being respected.The Prefers Non-Monogamy trait gives sims a different threshold for feeling forgotten by their partners (kSpecialNeglectThreshold instead of kNeglectThreshold), and sims with Prefers Non-Monogamy will get a sad moodlet instead of feeling betrayed if they’re neglected in favor of their partners’ other partners.
Interactions
”Define Relationship” Menu
Express Devotion initiates an Open or Closed relationship and (if you choose the romantic version) adds romantic interest status.Ask for Open Relationship changes the relationship type to Open for both the actor and the target.Ask for Closed Relationship changes the relationship type to Closed for both the actor and the target.Ask To Include Sim In Relationship gives a partner of the actor the selected type of relationship with the selected sims. This is the interaction to use for asking for Closed relationship partners' permission before starting romantic relationships with new sims.
”Friendly” Menu
Discuss Polyamory has a kChanceOpenMindedFromDiscuss (default: 10%) chance of giving the target the Open-Minded trait.Ask Relationship Status makes the target report their relationships.

Other Interactions
Self Interactions (click on active sim)Object interactionsThere’s also a kChanceOpenMindedFromBook (default: 25%) chance of getting the Open-Minded trait from finishing a romance or trashy novel.

* = Does not require the Open-Minded trait.
Tuning
All the tunable values in the mod are listed here.

Instructions
Installation
There are two packages in the downloads section, lizcandorPolyamory and lizcandorCommon; install both. If you’re using any of my other mods that also require lizcandorCommon, only install one version of the lizcandorCommon package: they’re all the same, and you don’t need duplicates.

Activation
Before the mod is activated, all it’ll do is prevent its traits from being added to any sims (except through Create-A-Sim). This is for the safety of your saves

To activate it, enter the cheat "activatePolyamory". There will be a short lag as everything is set up; a similar amount of lag may occur whenever a world with this mod already active is loaded. The mod will stay activated when you travel within a save, but should not carry over between different saves.

Removal
To deactivate this mod, enter the cheat "deactivatePolyamory" in every world you've visited in each save you’ve activated the mod in. The deactivation cheat removes the mod's custom traits from all sims in the current world; if you don’t do this, your save may not be able to load without the mod installed (see Arsil’s Custom Traits Manager for details).

If you're deactivating the mod but not removing it from your game, you'll still need to quit and restart to fully undo the changes it makes.

Compatibility
This is a pure script mod, and as such it should not conflict with most other mods. However, if you’re using NRaas Woohooer, romance and woohoo jealousy must both be set to “none” in Woohooer's settings, or Woohooer will continue triggering jealousy reactions according to its own rules: Woohooer has its own jealousy method not affected by this mod.

Also, this mod was built and tested on patch 1.69, and may not work on previous patches.

Thank you!
To Arsil for the custom trait manager and tutorial
To Chain_Reaction for guidance on making this Woohooer-compatible
To NRaas forum members whose discussions originally inspired this mod
To simsample for creating the lot in the images, the beautiful Bluepoint Mill!
And to MissPat for testing, encouragement, and feature recs since the beginning of this project


You need both lizcandorPolyamory and lizcandorCommon in your game for this mod to work. If you've already got a lizcandorCommon package from one of my other mods, though, you don't need to download it again here.